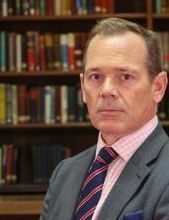 Peter is Director of Military Sciences at the Royal United Services Institute, having been the Senior Research Fellow for Sea Power and C4ISR since 2014.

He researches and publishes on a range of subjects from strategy and philosophy, contemporary war, military doctrine and thinking, command and control, naval warfare, ISR, professional military education and disruptive warfare techniques.

He lectures, speaks and writes on these topics as well as regularly providing advice for both UK and foreign governments.

Previously, Peter was a career Warfare Officer in the Royal Navy, serving as both a Commanding Officer, National Military Representative and in a variety of roles with all three branches of the British Armed forces, the US Coast Guard, US Navy, US Marine Corps and intelligence services from a variety of other nations.

He served as chairman for several NATO working groups and 5 Eyes Maritime tactics symposia. His military career included service in Hong Kong, the Baltic, Kenya, the Former Republic of Yugoslavia, Iraq, South Africa, Pakistan and Oman, interspersed with deployments in the GIUK gap and the Persian Gulf.

Peter has a Masters degree in Defence Studies and a doctorate in politics and modern history. He is a Visiting Professor of Modern War at the French Military Academy.