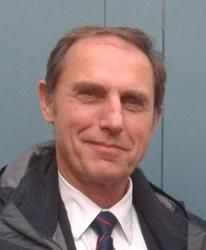 Stéphane Jespers graduated in 1979 as a Civilian Electrical Engineer in Telecommunications and Hyperfrequencies at Université Catholique de Louvain in Belgium. His carreer started as a researcher in the field of satellite communications and TV. In 1983, he joined SACLANTCEN, La Spezia (Italy) as a scientist of the “activate adjunct to the towed array” project, which later led to the development of the Low Frequency Active Sonar concept. In 1990, he joined DCN at Le Brusc in France, working on several passive and intercept sonar projects for submarines. In 2000, he returned to La Spezia as Head of the ASW systems Department and led the creation of the Cooperative (AUV-based) ASW concept project. In 2007, he joined DGA at the Paris headquarters as an expert in UWW sensors and launched the anglo-french cooperation project on wideband multistatic active sonar. In 2010, he became chaiman of the NATO capability group in ASW and in 2012, he chaired the merger of three NATO capability groups in order to form the UWW capability group. In 2013, he returned to Toulon to head the UWW Department at DGA Techniques Navales. Stéphane Jespers has given numerous papers in international conferences such as UDT and ECUA and he has also chaired sessions mainly in the field sonar. He is a member of the Société Française d’Acoustique (SFA) and a reviewer for the IET journal.