Our panel discussed the latest themes which influenced the selection of papers for this year’s conference, and identified some of the questions, priorities and challenges in these topic areas.

Unfortunately there wasn't time to answer all questions raised to our panel, so we have compiled them for you to view.

Additionally, the panel explored areas raised by questions from the audience related to the Sensors & Processing stream.

Ministry of Defence, The Netherlands

Dr Sue Metcalff is a Chartered Physicist with a first class degree in physics. She has spent over 20 years in maritime defence research, specialising in simulation and modelling in the undersea domain, and holds a PhD in efficient numerical methods for predicting the performance of sonar arrays. Sue sits on the Senior Management Team at Atlas Elektronik UK (AEUK) as both Chief Technology Officer and Head of MOD Research and Advice Division. Her responsibilities include shaping the business’s innovation, science and technology strategy and running a research and development portfolio that aims to push innovative maritime S&T into service.

Dr. S. Peter Beerens graduated in theoretical physics at the University of Amsterdam and received his PhD in 1995 at the Royal Netherlands Institute for Sea Research. In he joint 1996 the Sonar Department of TNO. Currently he is senior scientist and programme manager. He has specialised in sonar signal processing and sea trials.

Peter graduated in Electronics from the University of Manchester followed by a Masters Degree in Business Administration from the Open University. He has worked in the Maritime sector in various engineering and technical roles for over 38 years. During this time he has been a technical leader for the development of several large and complex active and passive ASW Sonar systems. He has previously led a number of UK MoD/Dstl research programmes frequently working with academia and SME’s on innovative future technology solutions. 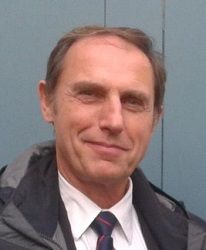 Stéphane Jespers graduated in 1979 as a Civilian Electrical Engineer in Telecommunications and Hyperfrequencies at Université Catholique de Louvain in Belgium. His carreer started as a researcher in the field of satellite communications and TV. In 1983, he joined SACLANTCEN, La Spezia (Italy) as a scientist of the “activate adjunct to the towed array” project, which later led to the development of the Low Frequency Active Sonar concept. In 1990, he joined DCN at Le Brusc in France, working on several passive and intercept sonar projects for submarines. In 2000, he returned to La Spezia as Head of the ASW systems Department and led the creation of the Cooperative (AUV-based) ASW concept project. In 2007, he joined DGA at the Paris headquarters as an expert in UWW sensors and launched the anglo-french cooperation project on wideband multistatic active sonar. In 2010, he became chaiman of the NATO capability group in ASW and in 2012, he chaired the merger of three NATO capability groups in order to form the UWW capability group. In 2013, he returned to Toulon to head the UWW Department at DGA Techniques Navales. Stéphane Jespers has given numerous papers in international conferences such as UDT and ECUA and he has also chaired sessions mainly in the field sonar. He is a member of the Société Française d’Acoustique (SFA) and a reviewer for the IET journal.

Nick has over 20 years’ experience in Maritime systems and system architectures covering underwater and above water platforms. Through a career which started in UK government and now in industry Nick has been involved in the research and development of sensors, command systems and new autonomous vehicle capabilities. Nick’s current role is Underwater Communications Solution Architect within Thales UK, a role which involves development of advanced underwater communications solutions and their integration within complex systems-of-systems, including addressing the through air-sea interface and connectivity into wider above water networks.

If you have any queries about the webinar please email us.

Take a look at our upcoming series of webinars